Bicentennial of the Declaration of the Independence of Argentina


The Central Bank of Argentina has issued a commemorative coin for the 200th anniversary of the countrys declaration of independence. 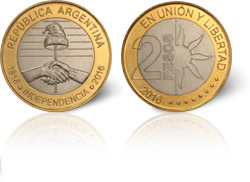 Core: The coin features a pikewhich represents the defense of the nationtopped with a Phrygian cap as a symbol of freedom, and two hands clasped together signaling unity and fraternity among the peoples of the United Provinces of the Río de la Plata. In the upper part, in heraldic language, the colors of Argentina: light blue is represented by horizontal lines, and white, as a plain background, in the lower part.

Ring: The upper arch reads REPÚBLICA ARGENTINA (ARGENTINE REPUBLIC) and the lower arch, 1816 INDEPENDENCIA 2016 (1816 INDEPENDENCE 2016), in reference to the bicentennial of the Argentine independence.

Core: On the left, the face value and the word PESOS in vertical position. A partial stylized sun on the epaulette of the military uniform of General Don José de San Martín completes the picture.

Ring: In the upper arch, the motto EN UNIÓN Y LIBERTAD (IN UNION AND LIBERTY) can be read. It was used in the first national coins minted by the Assembly of the year 1813 during the Independence War. In the lower arch, the year of coinage2016followed by 8 dots.